Last year Infinity Foods Co-op Shop & Bakery launched our ‘Growing a green future’ campaign. When we asked, why does a ‘new normal’ need to mean worse? We could further democratise the way we all work and live, with more co-operatives and harness our full potential by putting our natural environment first, as well as what’s best for our communities, not just the interests of a small number of people and their greed for profits.
We have been given an opportunity to build a world with stronger foundations that work for the betterment of all, and one of those foundations is a Resilient food system. 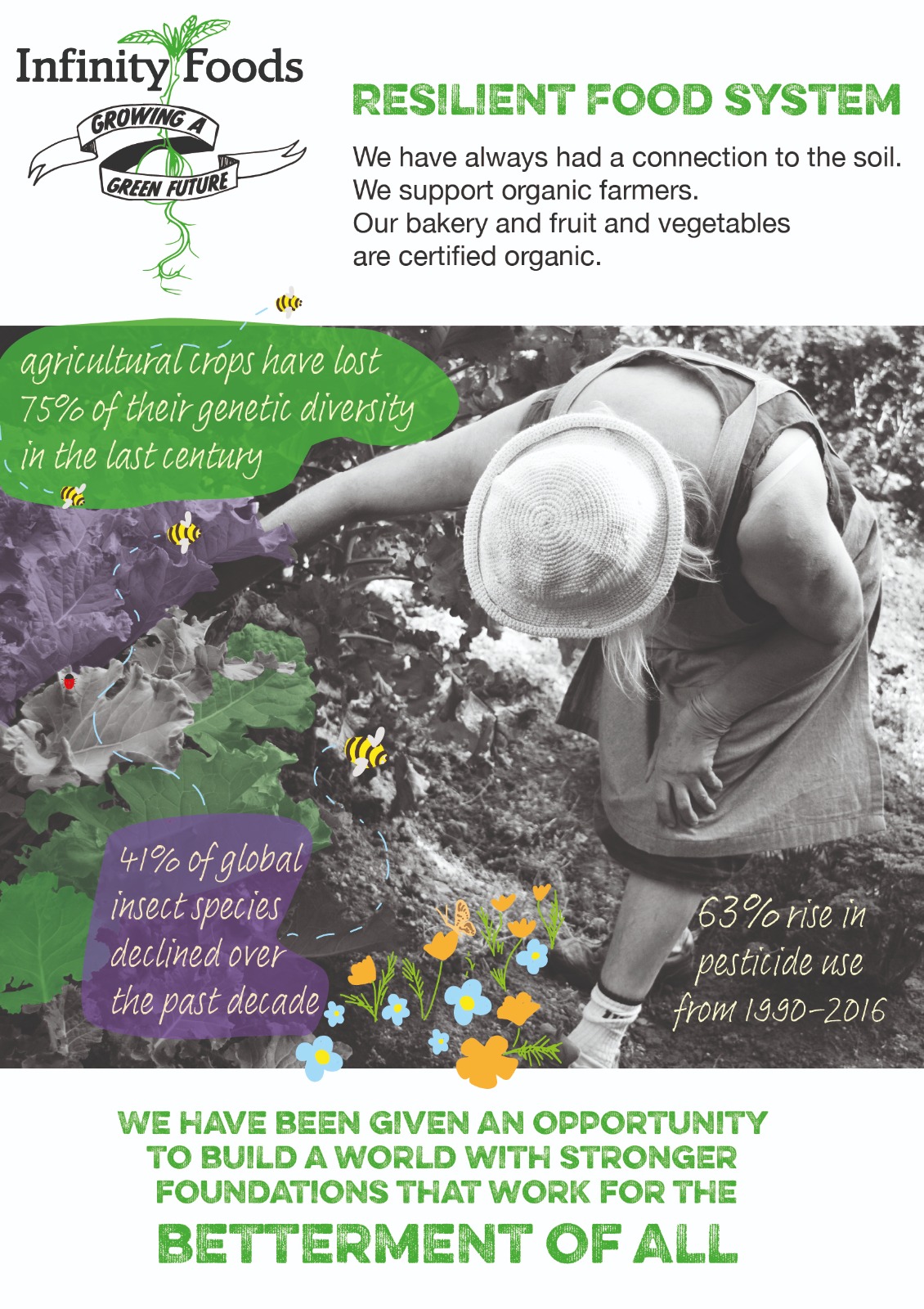 Our food and farming system is stuck on a chemical-reliant treadmill and we need it to stop. Despite the increasing evidence of the dangers to our health, let alone to wildlife, pesticide treatments have been going up and highly toxic pesticides remain in use. Farming has become reliant on the intensive use of pesticides and they’ve found their way into our food, our soils, our rivers and our wildlife. These chemicals are designed to kill and the chemical cocktail is building up.

The problem with pesticides:

We have the chance to do something about this!

The UK Government has launched a public consultation into its forthcoming National Action Plan on Sustainable Pesticide Use. This is your chance to say it’s time to put nature, wildlife and our health first!

Why the National Action Plan is important

The Soil Association has launched its latest Action Plan and it is well overdue. It also comes at a critical time for UK farming as we leave the EU and forge our own agricultural policies. (Visit our blog to find out more on why we don’t support future toxic trade.)

Farmers must be supported to transition to nature-friendly, agroecological approaches, like organic, that don’t rely on pesticides. Despite previous commitments from the UK Government to reduce pesticide use, the support farmers need is not in place.

Intensive pesticide use has been a bedrock for our current unsustainable farming system; changing it is a huge challenge and yet absolutely vital if we are to move to more sustainable farming. It is essential this new plan acknowledges the extent of the problem and is truly ambitious about changing this, for the sake not only of wildlife and our health, but also other connected issues like nitrogen pollution and soil degradation.

What must be included in the National Action Plan

1.Given the intensity of their use, it may seem crazy, but the UK Government has no targets around reducing pesticide use in the UK. This is something The Soil Association have long called for and it looks like they are close to finally winning. The current draft includes a commitment to new metrics and targets to reduce the risks associated with pesticides by 2022. They need to secure this win. But they also need to go much further. For example, these targets should be as good as, or better than, the EU’s proposed target on reducing pesticide use and the associated risks, by 2030.

2. Farmers need support, relying on voluntary measures is not enough. Currently, there is little advice and research available to farmers focussed on reducing the risk of pests and disease in the first place. So, this really does have to change, and this needs considerable government commitments. For example, public funding for farmer-led and agroecological research needs to increase substantially.

3. This is about acknowledging the alternatives and better applying the precautionary principle. There are great examples of pesticide-free towns that show the first part of this is more than possible. And history has shown that we keep leaving it too late to phase-out those of particular concern. It is time we stopped history repeating.

Add your voice now – tell the government enough is enough!